In which GTA gets quite a lot of coverage, given that it’s 10 years old this weekend!

There’s a new article about DMA before they were big. Not sure I’d characterise DMA as not-big before they transitioned to a being of pure energy (i.e. became Rockstar). At one time DMA was the largest independent game developer in Europe. That said, this one has my name in it!

IGN talks to Dan Houser about GTA III. This is to the North of what I really think of as being DMA, but interesting nevertheless. In a similar vein, there’s news of GTA III being ported to iOS and Android.

Yet more on GTA III in a Blast from the Past article on Gamers Hub.

Finally, an article about computer games in education, referencing DMA’s role in Abertay University, written by one of my old lecturers when I was at Abertay in the early 90s, back when it was called Dundee Institute of Technology.

There’s a story behind that image. Of course there is; there’s a story behind every image. This particular set of gurning bitmaps I only ever saw once – and that particular fragment of the DMA story began in 1990 when I made a visit to the office in Meadowside. The original proper office had already become too small and we’d moved into this larger one. Amongst the original DMA people, Meadowside would ultimately become known as the Old Office, as distinct from the Perth Road office where Lemmings had been created. That would become the Old old office. And by ‘proper’ office, I mean anything which came after the very first office in the shape of Russell’s bedroom. (Dave’s bedroom, on the other hand, was merely DMA’s international headquarters.)

At the time I had yet to become a full-time employee, instead doing freelance graphics for Dave for more money in less time than I had even seen in my life. Turning up one day with my latest progress in what was likely to have been gfx for the PC Engine conversion of Ballistix, I happened to have arrived at the same time as Scott Johnston. Scott was the designer/programmer behind the Amiga game Hired Guns and was demonstrating an early version in Dave’s (real) office.

END_OF_DOCUMENT_TOKEN_TO_BE_REPLACED

On Feb 14th 2011, Lemmings had it’s 20th anniversary from the day of release. Gary Timmons arranged a talk at Abertay University to inform the audience something of the background to the game. Although I wasn’t the official videographer, I managed to find a place to stick my camera. (That’s me taking stills in the background!)

DMA had a Design Department, which lived in Room 2.7 of Discovery House. The whiteboard would often seem to be the centre of creativity for the room, and to blow off some steam. I took these pics with DMA’s Kodak DC40, one of the first widely available digital cameras, which would mean the pics were from sometime after 1995. It had its very own image format, which meant that I had to track down a conversion program to get them into an open format. The camera itself could store 8 (yes, eight) images at a time. We used it to take pictures for the newsletter, meaning that they could be incorporated much more quickly (my dallying aside) than a traditional film camera.

Although his particular afternoon had a Star Wars theme, that’s me in the top right corner, being a Vorlon from Babylon 5. Different as ever.

See the rest of the board after the jump…

END_OF_DOCUMENT_TOKEN_TO_BE_REPLACED

GTA is Popular and Sells Well

Now there’s a controversial headline and, well, we kind of knew that anyway.  But it’s nice to have official confirmation.  Scottish Games has an item about sales of GTA to date. Although this blog kind of ends before GTA IV, it’s interesting to see the reach which GTA has.  Just to underline the  point, Genius Anime lists it as one of the top ten genre-defining games ever.

The Making of GTA Music

The Gaming Liberty has the most comprehensive interview with the musicians behind those GTA radio stations, I think I could ever imagine seeing. From the article:

“Over the past few months I’ve had the great pleasure in interviewing four key players behind the music of Grand Theft Auto- Colin Anderson, Grant Middleton, Stuart Ross and Paul Mackie. If you’re like me the original GTA, and especially its soundtrack, meant a great deal to you.”

My time at DMA only intersected GTA up until mid 1997, during which I was on other projects such as Body Harvest, but I certainly had fun on the bits I did have a hand in. (Mainly writing dialogue, which would never ultimately be used after I left.) So I’m learning more here about GTA, than I ever knew at the time! END_OF_DOCUMENT_TOKEN_TO_BE_REPLACED

One of the lesser-known musical scenes is the updating of old computer game music. Most of the source material seems to be from the Commodore 64, with considerably less coming from the Amiga. On occasion I’ve downloaded tracks to listen to on a Friday night, accompanied by a few cans of beer. Even so, I’ve noticed that DMA games haven’t been particularly well served to date. Thankfully that may be about to change.

010101 Music is currently putting together a remixed collection of some the Amiga’s greatest hits. To be titled Paula, Agnus & Denise – Best of Amiga and CD32 video game music, this brings together a number of different artists. DMA Design is represented by Hired Guns, the original tracks being composed by Brian Johnston and highly acclaimed. Inclusion of what I’m told will be a medley, will depend on obtaining the permission of Sony who currently hold the rights.
END_OF_DOCUMENT_TOKEN_TO_BE_REPLACED

The notorious anonymous urban artist Banksy has perhaps – but only perhaps – left a tribute to one of computer games most famous characters on the wall of a car park. It is just around the corner from Abertay University, which had long had a relationship with DMA and later Realtime Worlds. 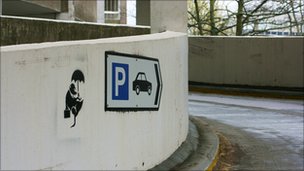 Rat with Umbrella (via BBC)

Update: I passed by the location today (12th Sep 2011) and someone has painted over it.

Computer Active has a very nice blog post about the 20th Anniversary of Lemmings; very nice because they’ve quoted me and asked nicely about using one of my photos! This is probably as good a moment as any to show off my belated joining of Flickr, to which I’ve added a selection of pics from the celebration. The (temporary) plaque at DMA’s “old old office”. I’m told that there are plans afoot for something a little more permanent. I’ve also taken the opportunity to add this location – and DMA’s other office – to Ben Goldacre’s Nerd Map in case anyone wishes to make a retro computer game pilgrimage.