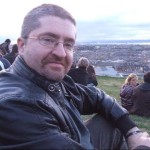 “Welcome” is the traditional greeting, I believe. DMA Design was the most significant computer games company in Dundee. Ultimately responsible for Lemmings and later Grand Theft Auto, a case could be made for DMA being one of the most significant games developers in the world. I worked there from 1991 to 1997, though my involvement …